Tom Ellis’ Lucifer is wonderfully sarcastic and refreshing. What more could you expect from a Welshman trying to fill the void left by Ioan Gruffudd (Forever) and Matt Ryan (Constantine) on our screens.

Lucifer was created by Tom Kapinos (Californiacation) based on a character created and developed by Neil Gaiman and Mike Carey in the Sandman comic book series. 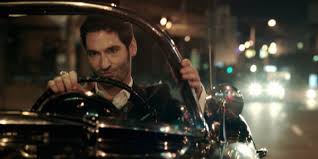 Lucifer focuses on the bored Devil, Lucifer (Tom Ellis – Miranda, Once Upon a Time), who abandoned his throne for the thrills of Los Angeles. The death of a friend leads Lucifer to Chloe Decker (Lauren German – Chicago Fire), an LAPD homicide detective who is strangely impervious to Lucifer’s charms. The Lord of Hell, it seems, is rather fond of a good mystery. Fond enough to help her fight crime and restore her reputation as a detective.

A crime fighting devil with a conscious and an invested interest in the human race that doesn’t involve their sins? If you say so.

Lucifer is not the first cop/supernatural being to grace screens the world over. In fact, just twenty minutes into Lucifer, I found myself wondering whatever happened to Forever? You know, the immortal New York medical examiner Henry Morgan? No, the format is not new: I just hope the sarcastic Devil can save this show from burning up as its predecessors have done.

Lucifer presents a witty and invigorating image of the cosmic order, well-placed gags and all. Of course the Devil owns a club. What else would he do with his down time?

This show flips reality and makes us question everything we ever believed about evil and good. If an Angel can hate his own brother for saving humans, what is good? And if the Devil can save a woman’s life, what is Evil?

The underlying question teased in this pilot makes this show ever so intriguing. If Lucifer was forced to take charge of Hell by his father, is he inherently evil? Or does the real evil lie in the righteous? I’m leaning towards the latter.

I’m sure the handsome devil will answer that question in good time.

This website uses cookies to improve your experience while you navigate through the website. Out of these, the cookies that are categorized as necessary are stored on your browser as they are essential for the working of basic functionalities of the website. We also use third-party cookies that help us analyze and understand how you use this website. These cookies will be stored in your browser only with your consent. You also have the option to opt-out of these cookies. But opting out of some of these cookies may affect your browsing experience.
Necessary Always Enabled

Any cookies that may not be particularly necessary for the website to function and is used specifically to collect user personal data via analytics, ads, other embedded contents are termed as non-necessary cookies. It is mandatory to procure user consent prior to running these cookies on your website.